What’s Fancy about V-Ray Next for SketchUp?

Deyan Evlogiev
Mar 27, 2019 12:29:30 PM
V-Ray is one of the most popular and widely used rendering engines fully integrated with SketchUp. It has become an industry standard when it comes to architectural visualization, both interior, and exterior.
Well, what is going to happen… Next? 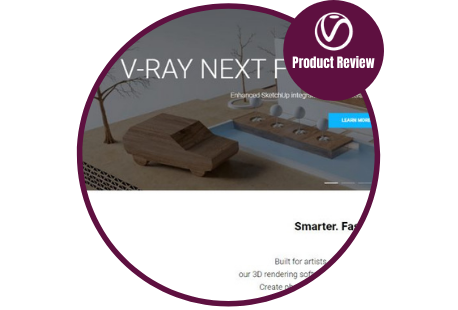 V-Ray Next is one of the most anticipated updates when it comes to the royalty of SketchUp Plugins. And that is no surprise, considering how V-Ray paints with light, allowing the artist to express their views way beyond just sketches and so-so representations. Thanks to such workflows, artists using SketchUp have the power to visualize their work at the right time of day, in the right atmosphere with just the right reflection.

This powerful visualization tool now has a new release for the lovers of SketchUp. Some people have been anticipating this since the software came with its latest version for 3ds Max, almost a year ago.

Today, or more accurately – last month, all of this is coming into a theater near you… and by theater, I mean a computer running SketchUp.

So, this leaves us with two questions. For some people the question is “Why do I need V-Ray?” and for others, who already know the first answer, the question is much simpler – What is new in Next? Today we will focus on the second question, but be sure that it might even answer the first one while we are at it.

When it comes to new things in V-Ray Next, one of the first noticeable ones is the update in the User Interface. While with V-Ray 3.4, which was the previous major release, Chaosgroup revolutionized the whole interface and completely changed everything from it antecessor, with V-Ray Next the changes are more suitable, but yet – quite noticeable. 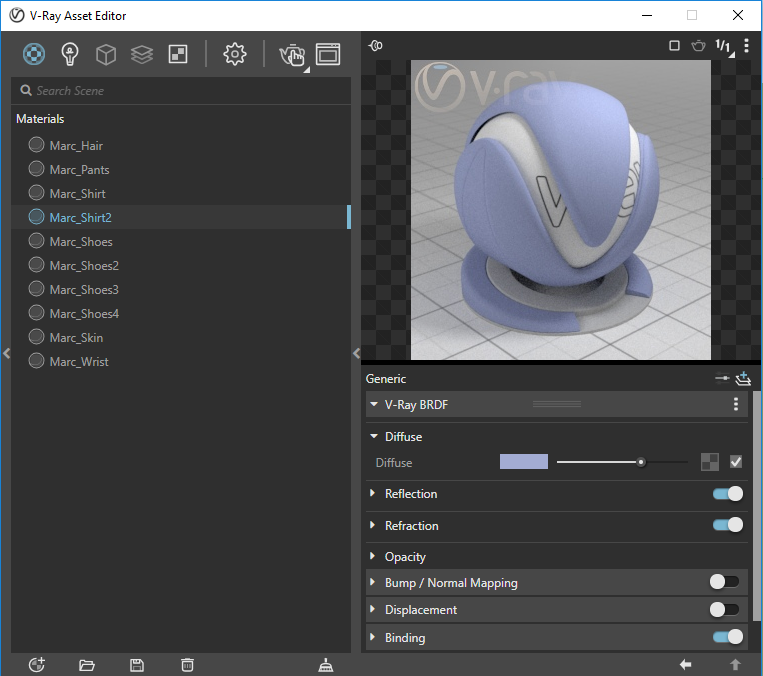 Even for the experienced user who is open to new software, some of the changes might seem a bit unintuitive. Not only there are a few additional toolbar shortcuts, but also the main UI of the Asset editor now shows all lights, materials and dynamic geometry pieces. This works as an “all in the scene” type of an outliner, only focusing on rendering parameters. By default, Materials and Lights are enabled, and if you want to switch this you can enable/disable what is shown. To show more than one category, you need to hold Control while clicking, which is quite the new approach to the Asset Editor. 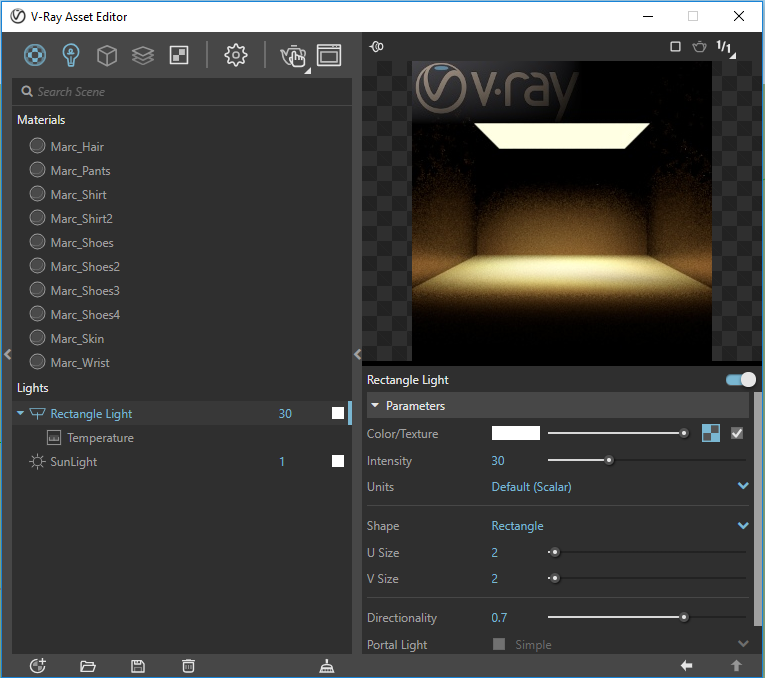 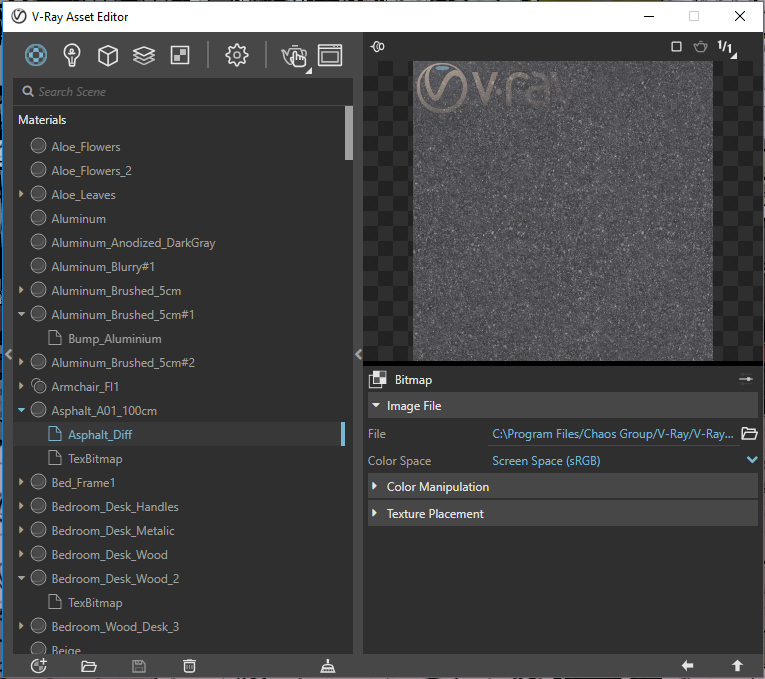 The material preview now is situated on the right, with the added previews of lights and how they affect the scene. Another new addition is that the Create function of the Asset editor now allows you to create not only materials but also textures, lights, dynamic geometry, even render elements. The big bonus here is that thanks to the new way of previewing materials and lights the user can easily see the material structure and what kind of maps are involved in there, which is quite a nice addition, especially for people working with complex shaders.

The con is that we say “Bye, bye”
to the concept of the small and compact
material editor from V-Ray 3.X

But to be honest, I don’t know many people who were using it anyway… 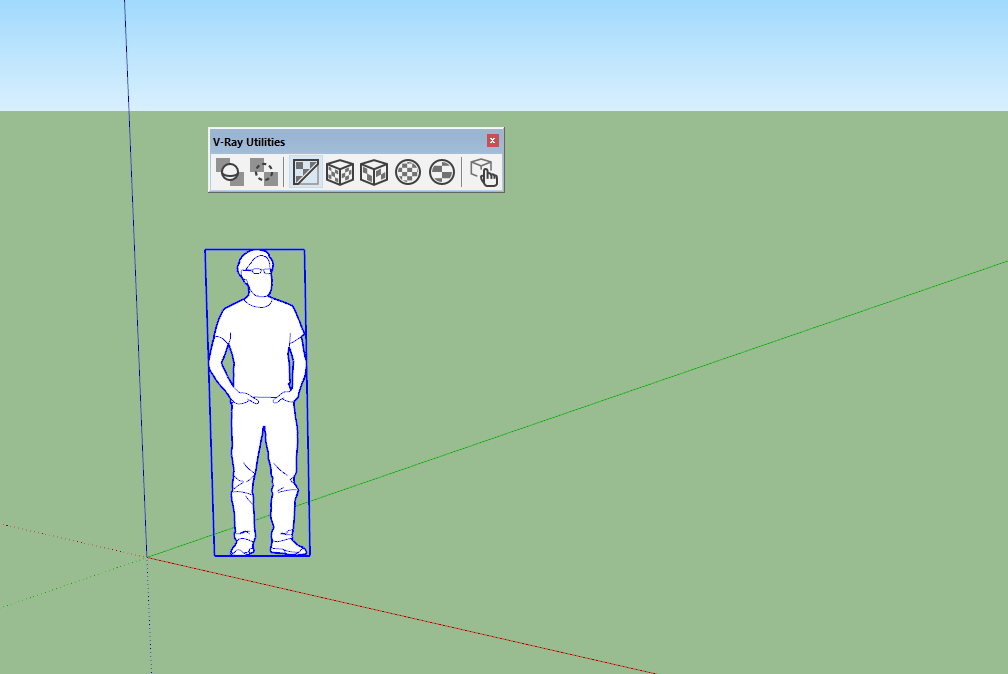 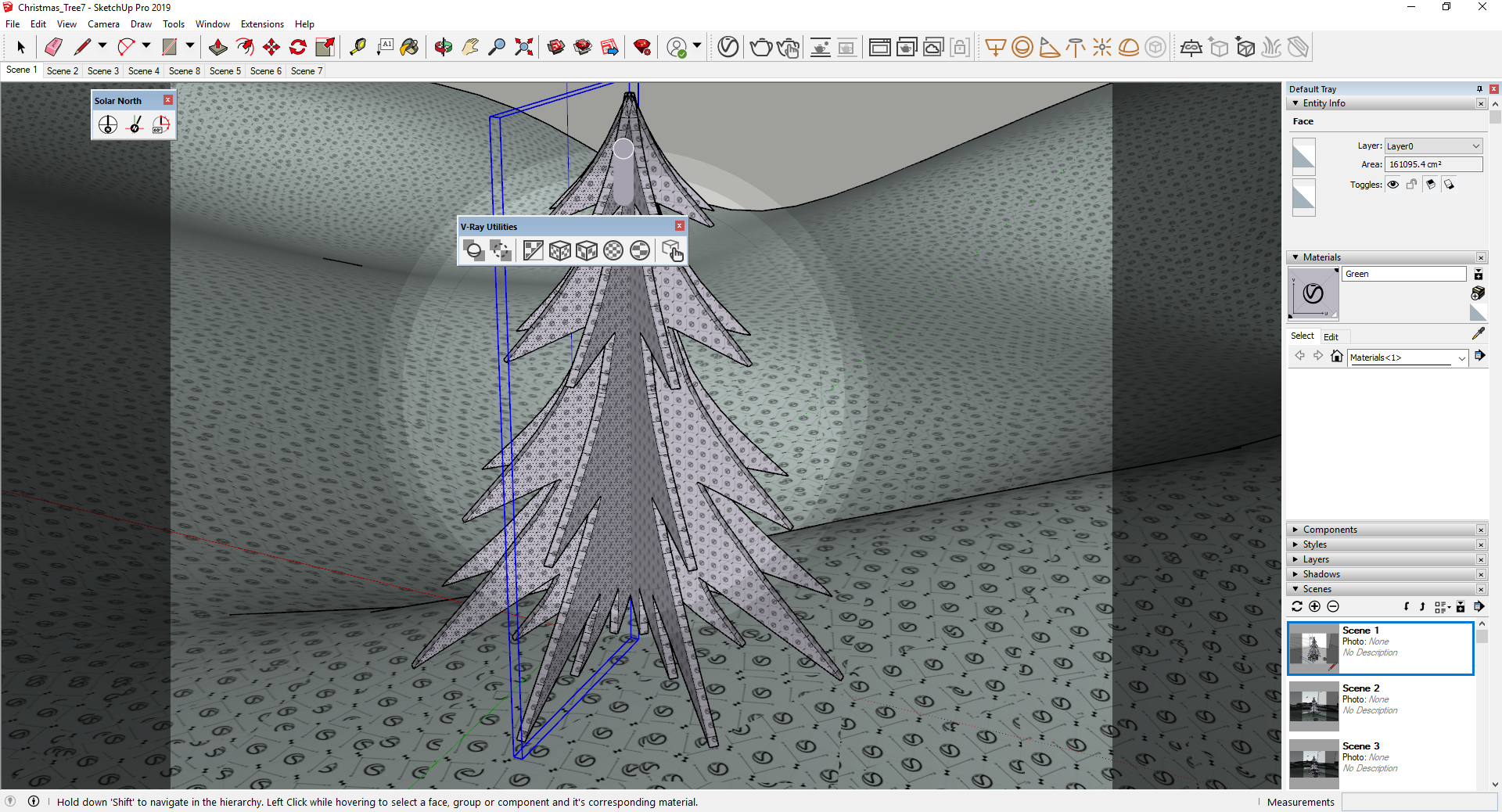 There is also the addition of a few tools focusing on the SketchUp scene hierarchy, helping the user to manage groups, material assignments, texture projections and so on. Those are added in a completely new toolbar that comes with V-Ray Next. In their heart, these shortcuts try to make the life of people working with geometry imported from other software or complex models build inside SketchUp itself much easier. These shortcuts focus on the initial grouping of faces, edges and such inside a complete model and how the textures are projected on this particular model. The toolbar includes Utility management, texture projections and the Scene Interaction tool which brings a very interesting approach to displaying scene hierarchy in the viewport. Despite the great concept, only time will show how intuitive they are to the native SketchUp user and how much they actually optimize the whole workflow.

All in all, the UI in V-Ray next is a bit more shiny,
a few additional previews and options,
but nothing major or scary different
so it should be easy for the experienced user.

Going into the core and the functionalities of V-Ray Next, there are a few standouts which are in line with the whole Next approach. One of the major highlights here is the Adaptive Dome light functionality. Since image-based lighting – using the Dome Light – is one of the typical SketchUp workflows, this addition can really speed up and ease the workflow of visualizers.

The major idea here is that the dome light
works faster and there is
NO need for skylight portals anymore.

V-Ray will automatically calculate where the “openings” where the dome lights are visible are and render the image much faster, with good illumination. The Adaptive approach has been in V-Ray for quite some time, starting with the Adaptive lights in the previous version. All in all, this results in better illumination, much faster. Especially visible in interior renderings. 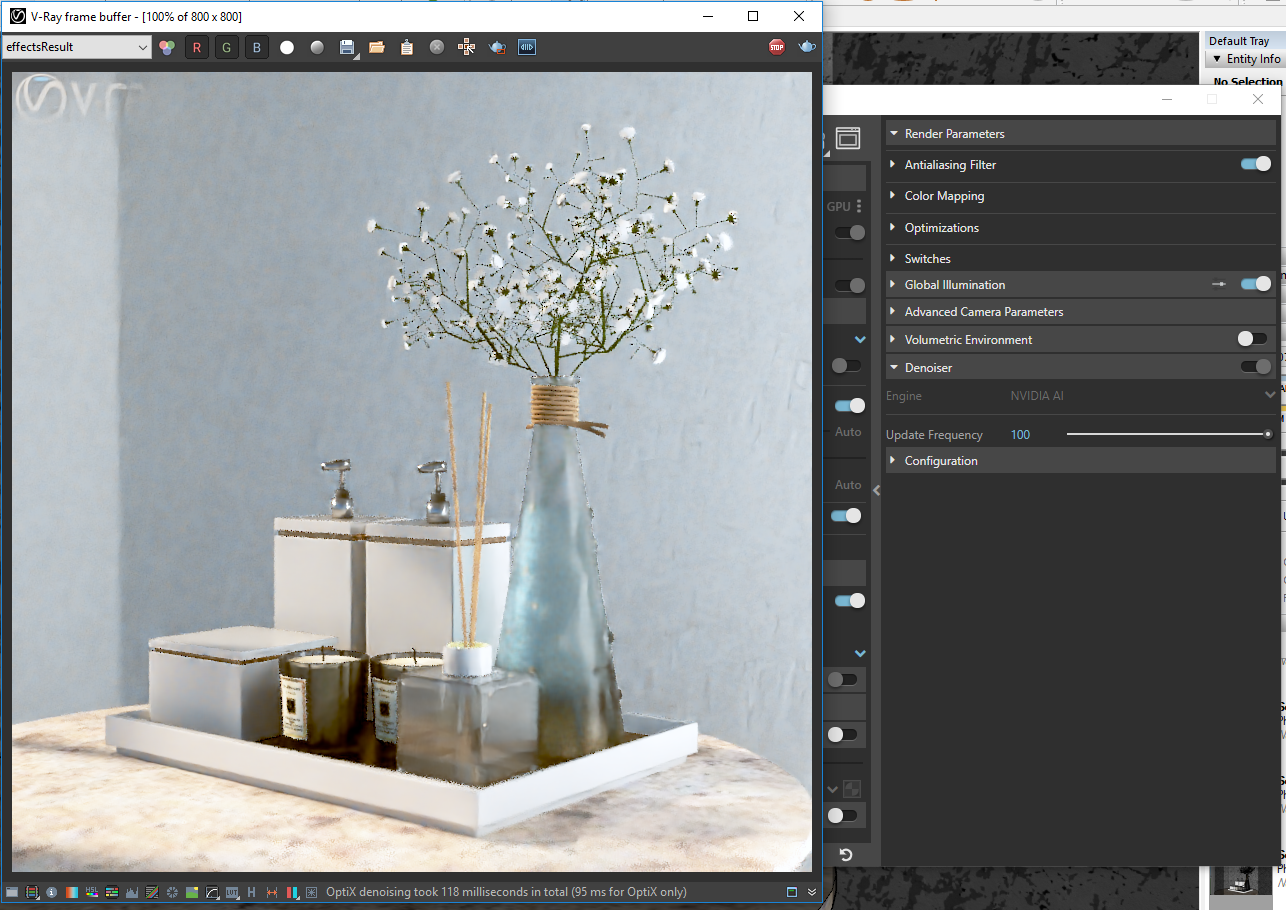 Another addition to a familiar workflow is also the Nvidia Denoiser implemented in V-Ray Next. Denoising has been a part of V-Ray since the 3.4 version and it allows users to have better results in much less time, just by reducing the noise amount. By knowing the scene V-Ray calculates the unnecessary noise and removes it after rendering to reveal a smoother, better-looking image with the details preserved in quite the smart way.

You can see the pattern here,
it is smarter and therefore faster
and easier to work with.

For those of you, who are fans of GPU rendering, V-RAy Next offers quite the optimizations in this direction and would be a sure improvement on the previous version. Although GPU rendering might be the hype among the computer graphics world, it’s not quite popular in SketchUp. In V-Ray Next the GPU is a completely ready production engine, available in interactive mode as well as something completely new – Bucket Rendering on the GPU.

The choice which one to use, CPU or GPU,
still bothers many people as there is
no clear answer.

And there will be no clear answer for rendering engines such as V-Ray as they support both. The choice is mainly dictated on the hardware investment and the preferred workflow, it is just better to stick to the one you have chosen. Nevertheless, for those of you who want to explore GPU rendering V-Ray Next is the perfect time to do so.

A few additional interesting features that come hand in hand with the whole smarter and faster approach are the automatizations, allowing the user to set automatic camera exposure and white balance. A little setback here is that they only work in production mode, but again – one less thing to worry about when final rendering. 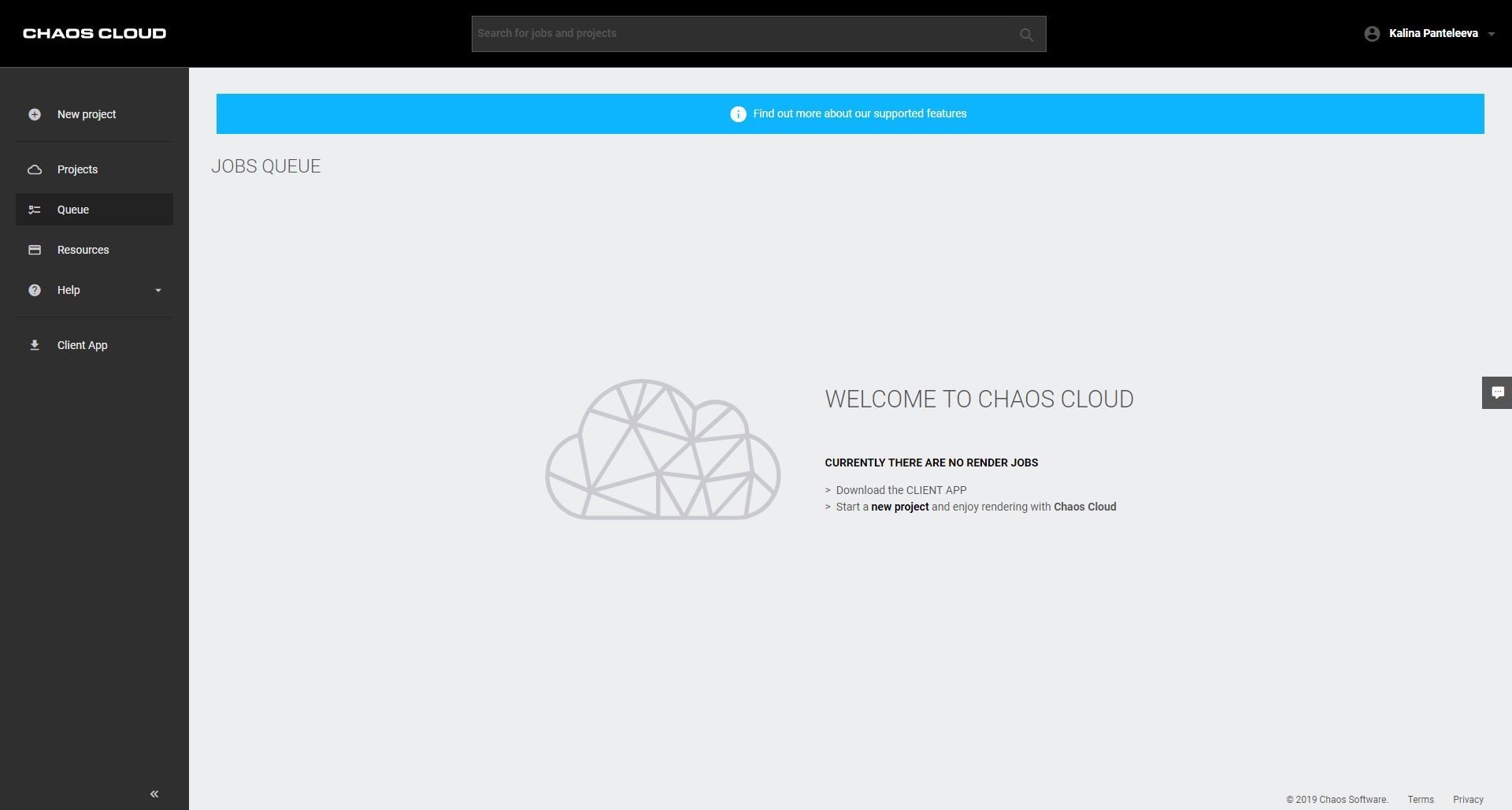 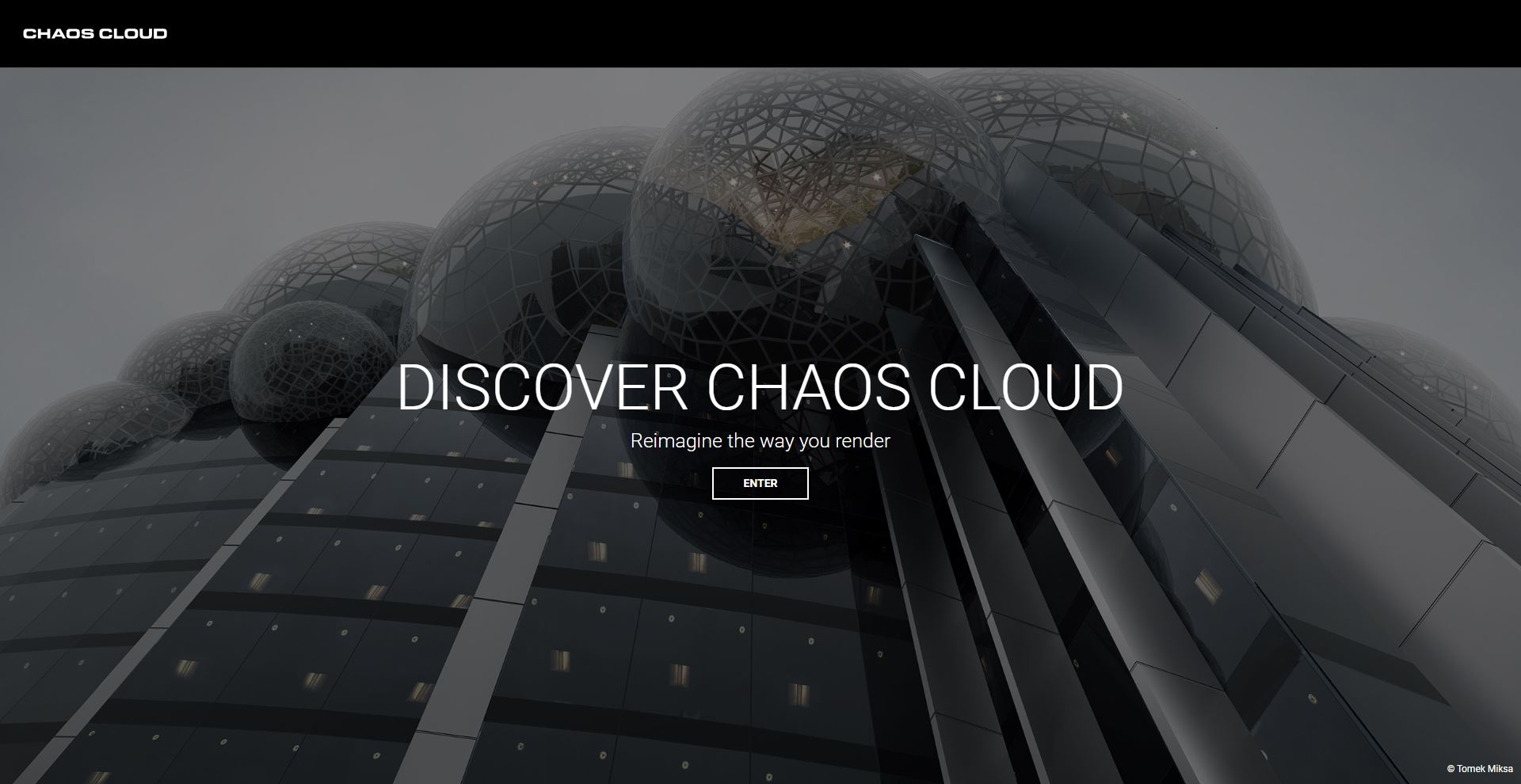 A major release coming for the whole V-Ray family is the V-Ray Cloud. Some of you might already be familiar with this one since the Beta has been roaming around for quite some time.

It's a one-click solution
to upscaling your whole
rendering process.

The V-Ray cloud is easy to operate, and just by pressing the button you send your whole scene up in the sky. Since it is coming from the rendering software provider itself, one of the major advantages here is that you are sure the rendered result in the cloud will be the same as the one you see on your local machine. This brings great power in the hands of freelancers, students, smaller studios and such allowing people to render bigger projects without worrying about the hardware, and therefore – in time. And let’s be honest, time is the major currency when we speak of 3D projects… So, let’s follow the trend and fly up high in the sky, reaching the Clouds.

V-Ray Next for SketchUp brings
more power than ever in the hands
of the SketchUp visualizer.

It allows you to create beautiful photorealistic images in less time, taking advantage of the full-blown power of one of the best rendering engines in the world. No wonder V-Ray has become an architectural standard over the years, just by a few clicks it transforms the image into something much more lively and easy to explain to the client. For the seasoned user, the NEXT version brings more in a very fast and adaptive way. Although there are some approaches that might take a few times to get used to, in the end, V-Ray next is worth the hype thanks to its adaptive methods, speed optimizations, and beautiful denoised results.

For the new user – hey, go check it out.
You’ll have fun, you’ll be inspired and you’ll create beauty!

Sketchup Pro vs Free: What are the main differences

During recession 3D skills and affordable tools are on architects' radar